In this document, we explain how the concept and configuration of IP tunnels (encapsulation devices) on the AXS GUARD appliance. This document was last updated on 21 Jun 2019.

An IP tunnel is an Internet Protocol (IP) network communications channel between two networks. It is used to transport another network protocol by encapsulation of its packets. IP tunnels are often used for connecting two disjoint IP networks that don’t have a native routing path to each other, via an underlying routable protocol across an intermediate transport network.

Sometimes called ipencap, is IP encapsulation within IP and is described in RFC 2003

GRE is a tunneling protocol that was originally developed by Cisco and can be used to transport multicast traffic through a GRE tunnel. GRE (defined in RFC 2784 and updated by RFC 2890) goes a step further than IP in IP, adding an additional header of its own between the inside and outside IP headers.

A GRE tunnel creates a point-to-point private connection like a virtual private network (VPN) and has the following advantages:

Assume you have two remote sites (A & B) that are physically connected with a leased line. Each site has one Internet connection.

Note that the Internet Redundancy feature must be enabled for this setup. 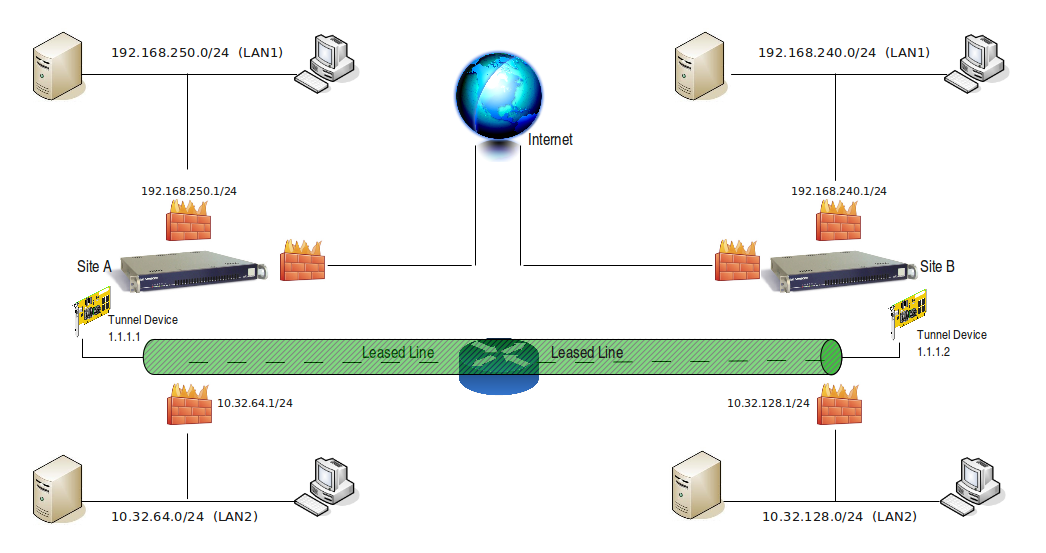 To allow easy logging, it is recommended to use advanced firewall rules on both tunnel endpoints (A & B), for example: