This document is a reference source for technical personnel, system administrators and network administrators who are looking to secure their network at the application level (layer 7 of the OSI model). This is also known as deep packet inspection, a form of computer network packet filtering that examines packet data and headers as they pass the AXS Guard appliance.

Examples used in this Guide

All setups and configuration examples in this guide are executed as an advanced administrator. Some options are not available if you log in as a full administrator or a user with lower access privileges.

As software development and documentation are ongoing processes, the screenshots shown in this guide may slightly deviate from the current user interface.

The application control system monitors the application layer (layer 7 of the OSI model) of the network. This is also known to as Deep Packet Inspection (DPI), a form of computer network packet filtering that examines the data part of a packet as it passes the AXS Guard, searching for defined criteria, such as protocols or websites, to decide whether the packet may pass or needs to be blocked. The AXS Guard also collects and reports statistical information about all layer 7 traffic.

The application control system allows application-layer detection of protocols, regardless of the port being used. This means that it is possible to both detect known protocols on non-standard ports, e.g. http traffic on ports other than 80, and also the opposite, e.g. detect Skype traffic on port 80. The system will also detect and block access to certain file types, such as multimedia files (if enabled).

The key benefit of the application control system is that it can "understand" a vast amount of applications and protocols (such as FTP, DNS, RDP or simple web browsing), and it can detect whether an unwanted protocol is being sneaked through on a non-standard port or whether a protocol or file is being abused in any harmful way.

It also allows administrators to swiftly block certain types of network traffic and files which are harder or impossible to block via the standard firewall (operating at layer 3 and 4 of the OSI model) and the proxy server. See the examples below.

A Layer 4 DoS attack is often referred to as a SYN flood. It works at the transport protocol (TCP) layer. A TCP connection is established in what is known as a 3-way handshake. The client sends a SYN packet, the server responds with a SYN ACK, and the client responds to that with an ACK. After the "three-way handshake" is complete, the TCP connection is considered established. It is as this point that applications begin sending data using a Layer 7 or application layer protocol, such as HTTP.

A Layer 7 DoS attack is a different beast and it’s more difficult to detect. A Layer 7 DoS attack is often perpetrated through the use of HTTP GET. This means that the 3-way TCP handshake has been completed, thus fooling devices and solutions which are only examining layer 4 and TCP communications. The attacker looks like a legitimate connection, and is therefore passed on to the web or application server.

Some versions of Adobe Flash Player allow remote attackers to execute arbitrary code via crafted .swf content or to perform DoS attacks. The impact is severe. In some cases there is a total information disclosure, resulting in all system files being revealed. These vulnerabilities also compromise the integrity of targeted systems. An attacker can also render systems completely unavailable.

The following application types can be blocked:

Situation in the Network Stack

The application control module monitors layer 7 traffic. Depending on the modules that are enabled on your appliance, you should consider the following: 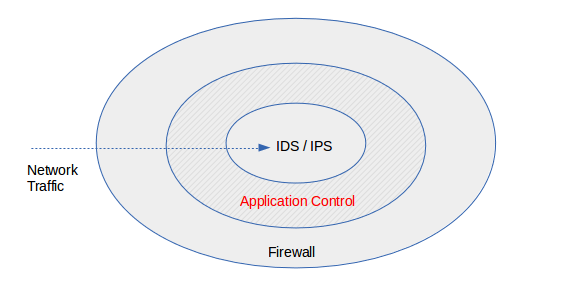 The AXS Guard application control system offers the option to log all dropped traffic. It also offers detailed traffic statistics per category through the use of simple filters.

Enforce user authentication where possible. Only allow applications that are absolutely necessary at the computer level.

Clients accessing the Internet via the AXS Guard proxy server are subject to the application control policy assigned under Web Access > General. Computer, group-level and user-level application policies are not applied in this case.

In this section, we explain how to access the following information:

When the page is initially rendered, the donut chart is populated with data generated since the time the firewall was first started or the application control feature was activated. After 5 seconds, the donut chart will be automatically refreshed and only show current data. This will provide administrators with a live view of traffic passing through the appliance.

This table contains the raw data shown in the donut chart. The first 5 seconds it will contain statistics that have been collected since the time the firewall was started or the application control feature was activated. After 5 seconds, the table will be refreshed and only show current statistics.

The line chart allows you to view the evolution of the application use over an extended period. The view consists of a detailed graph and an overview graph. You can change the range of the detailed view by using the selectors or selecting an area in the graph. The range of the overview graph is controllable by pressing the buttons below the chart.

By default, only unrecognized traffic is shown. This default behavior can be changed by checking the appropriate checkboxes in the table under the graph.

The network security logs are a compilation of information related to traffic dropped by the AXS Guard firewall, the IPS, SecureDNS, GeoIP filtering and the application control system.

The flow viewer allows you to consult active connections and use filters to extract information based on the:

If you encounter a problem

If you encounter a problem with AXS Guard, follow the steps below: